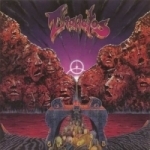 In my personal opinion THANATOS have always been the orphan child of the European Death Metal scene. They are one of the purveyors, not only on a local level, but also they deserve recognition for their share of worldwide impact on extreme Metal. Still, they ironically struggle to this day to maintain their cult status. So, another re-release of their "Realm Of Ecstasy" album? Yes, indeed, this time this masterpiece has been repackaged by Century Media, including pre – production demo versions of songs that ended up on the album, which were also released in 1991 as the "Promo Demo 1991". Plain and simple these bonuses are mostly rawer versions of what was to be found on their second album a year later. The actual album songs contained on this disk are what everybody is already familiar with, a much more thrasier ASPHYX combined with a decreased technicality level perhaps similar to what PESTILENCE achieved in their "Malleus Maleficarum" era. Not really sure if someone would actually be interested in this, bearing in mind that there have been two other previous re-releases of the same album, containing far more interesting bonus qualities than the version reviewed here. Even so, if you feel a consuming impulse, then head to www.thanatos.info, www.facebook.com/thanatos333, www.centurymedia.com