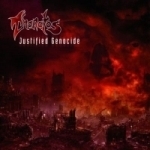 Along with classic acts like PESTILENCE, ASPHYX, SINISTER, SEMPITERNAL DEATHREIGN and tons more one should not forget THANATOS, the ancient force from the Netherlands, a band that managed to release two classic -by now- albums “Emerging From The Netherworlds” and “Realm Of Ecstasy” via Shark Records. In my humble opinion both records are excellent examples of how different THANATOS has been during an era where most Swedish Death Metal acts -for instance- sounded very much alike. The band reformed with a new line-up around 2000-2001 and released the great comeback album “Angelic Encounters” via the -now defunct- Hammerheart Records. I admit that “Angelic Encounters” managed to instantly grasp my attention back then and I admired the fact that THANATOS remained faithful to their classic Death / Thrash roots (one has also to remember that in 2000 – 2001 very few serious Death Metal bands have been around – Black Metal was still the “hot trend”). I am glad that back in the day I managed to interview the band for the -also defunct- Greek magazine Metal Invader. In all honesty I still don’t remember why I never managed to check out the band’s following album “Undead. Unholy. Divine”, even though the label that released it (Black Lotus Records) was a Greek one and I knew the people behind the label personally. Anyways, here we are with the brand new THANATOS album called “Justified Genocide” which will be released on the 6th of April via the new label (from Netherlands) Deity Down Records. My first listening experience of “Justified Genocide” took place before the recent HAIL OF BULLETS gig in Athens (with attendance of only 50 people!). For me this was a very special gig not only because HAIL OF BULLETS literally crushed and burned but also because I had the honor to personally meet Paul and Stephan who both proved to be incredibly cool (high guys!) Anyways, Paul was really kind to let me listen to a couple of songs from the new THANATOS album before the HAIL OF BULLETS gig started. I admit that I was instantly hooked by the new material of THANATOS! Ultra solid sound, sharp guitars spitting out loads of Thrash / Death riffs, a devastating production… these have been my first impressions. Sadly the listening experience had to be interrupted rather abruptly since the support band had to soundcheck. So I had to wait a couple of weeks before being able to check the album in its full glory. After I listened to the album on my own, my initial impression instantly changed: at fist I thought that the album was good, but I was wrong, the album is just great! Without exaggeration the THANATOS guys managed to come up with a fucking solid Death / Thrash Metal album that totally justifies their reputation and cult status. Even though you will hardly find anything “new” or “unique” in their sound, THANATOS delivers a lethal dose of hostile, full-speed Death / Thrash full of great sharp riffs, possessed vocals and unstoppable drumming. I have been especially surprised by the fact that the guitars didn’t sound at all like ASPHYX or HAIL OF BULLETS… Paul and Stephan managed to maintain a different style for THANATOS preserving of course their classic influences and obvious obsession with Thrash Metal. The production sounds huge but is not over-produced or polished, to the contrary, it manages to reveal the power and effectiveness of the songs in their full glory! I think the new material will sound killer live, but I am afraid that I will hardly have the chance to witness that first hand (perhaps I should visit them in Holland, hmm…). In total, we have here 9 new songs and 2 bonus tracks from their 2006 7” that included a re-recording of “… And Jesus Wept” (originally on “Realm Of Ecstasy”) plus ‘The Burning Of Sodom’ cover of – you know whom. To sum it up, THANATOS remains – without doubt – a solid force that manages to create some crushing Death / Thrash of great quality and deserve every possible support! www.thanatos.info, www.deitydownrecords.com 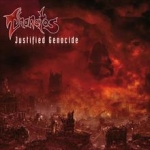 With the re-release of "Justified Genocide", the series of new editions of all THANATOS releases at their new home Century Media gets finally finished. Originally released in 2009 on the small Dutch Deity Down label, this album now gets a major distribution. In comparison to the original edition, the CD bonus tracks (‘The Burning Of Sodom’ 7") are left off, since they were already used on the new edition of "Undead. Unholy. Divine". So we have, more or less, the pure album here. And this album is another little step back, again, to the Thrash Metal roots of THANATOS. Somehow it reminds me of their country mates LEGION OF THE DAMNED. Stephan Gebédi and his team sound very fresh on "Justified Genocide", very tight and natural. Obviously this is a consequence of the very raw production, that didn’t need much studio technique, thank Lemmy. The whole album sounds like it could be reproduced on stage without any extra effort – THANATOS’ "Hordes Of Chaos", so to say. From the massively thrashing opener ‘They Feed On Fear’ over the very fine ‘The Devil’s Triangle’ and the title track to the splendid assault ‘The Netherworld ‘- each of the first six songs is a severe hit in the face. By the way: nice hint on the past with the latter one! But this album has a tiny little downer: the cover version of the classic MASSACRE tune ‘Dawn Of Eternity’. As with most cover versions from the same musical genre, this one is well done, but doesn’t catch up with the spirit of the original song, let alone the emotions connected with these songs. Yet it is just small point of criticism, for the song fits in here quite well. And the following ‘Apostles Of Damnation’ compensates for this little flaw a thousand times. A slow, marching rhythm and a very dense, gloomy atmosphere create one of the best, if not the best THANATOS song ever. This super highlight and the furious finish ‘Upwards Spiritual Evolution’, with its slight Speed Metal influences, get the album back on track. In the longer run, "Justified Genocide" turns out to be my favorite THANATOS album, since it is their most complete and balanced record. Not that bad for a band that celebrated their 25th anniversary with this album, huh? As the only bonus track, we have ‘Re-Animation’, a SACRIFICE cover THANATOS did for the Imperial Anthems series of 7"es on Cyclone Empire. The song was released on a split with the mighty ASPHYX and is the only recording they did with former HOUWITSER (among others) drummer Marco De Groot, who stepped in for Yuri Rinkel for a period of three years. What I wrote on the MASSACRE cover counts for this cover as well (and what I mentioned in the "Undead. Unholy. Divine." would also fit here as well again… to me both cover songs turned out really impressive, especially the THANATOS version of ‘Re-Animation’ is so close to the original that it’s quite scary… you very often even get the impression that Rob Urbinati himself is doing the vocals here! – Frank). Get more info here: www.thanatos.info, www.facebook.com/pages/thanatos/150901861608686, or www.centurymedia.com