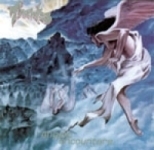 THANATOS is probably the oldest Death Metal band from Holland. In the early nineties, they released two good Death Metal albums, “Emerging From The Netherworlds” and “Realms Of Ecstasy” until the many problems with their record-company at that time and two cancelled European tours, as well as internal problems made the band collapse. Apparently mastermind Stephan Gebedi didn’t want THANATOS to end this way: he got ahold of some new members, Theo van Eekelen and Aad Kloosterward (SINISTER, HOUWITSER, JUDGEMENT DAY) as well as CREMATION-guitarist Paul Baayens. In this line-up, they recorded their comeback-album “Angelic Encounters” which turned to be a great Death Metal album! Most of the songs are rather fast played with the typical deep growls of Stephan, although they are also not afraid to slow their speed down to crushing doomparts which even kill more! The production is really good and makes the album not sound too modern which should be seen as a compliment. THANATOS also re-recorded two old demo-tracks on this album which never appeared on any of their albums before, namely ‘Speed Kills’ and ‘The Howling’. When listening to these two songs and comparing them to the new compositions on the album, one has to admit that their style hasn’t changed a bit. The digi-pack version has a very cool cover-version of MASSACRE’s ‘Corpsegrinder’ as a bonus (well, I hate to correct you, but it was originally an old DEATH tune, Steven… – Ed.). Also the really nice artwork (which reminds me a lot on the first IMMOLATION albums though) gives the album just this little extra which makes “Angelic Encounters” a more than well-done comeback-album. Very good stuff! 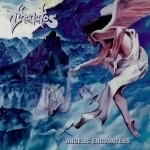 I was a late bloomer concerning THANATOS, I tried really hard to get into the band back in the days, but it wasn’t until I was hit by the ten ton hammer "Undead.Unholy.Divine." I changed my view on the Dutchmen, and I went back to re-listen to their older material. And was then piece by piece convinced about the qualities, of the rather thrashy Death Metal with technical tendencies here and there. I think what drew me into the THANATOS universe with "Undead.Unholy.Divine." was the sheer forwardness, brutality and sickness that the album expressed, something the rest of the band’s discography also showcases, when you get beneath the murky waters on top, which being a too technical twist, too fucked up vocal effects, muddy productions and what else kept me away from the band, back then. Though after my initiation I dug back into the back catalog of the band and new doors opened and I found wonders. Century Media has started a re-release campaign of the THANATOS wonders, last year saw the excavation of "Emerging From The Netherworlds" and "Realm Of Ecstasy" and this year the rotting remains of "Angelic Encounters" has been brought back to live. The two first re-releases were remastered by Dan Swanö and the same is the case with this release. The sound is a bit fatter and with more bottom, than the original release from Hammerheart. As a bonus we get the wicked EP "Beyond Terror" from 2002. I still have "Undead.Unholy.Divine." as my favorite THANATOS album though this one together with the debut full length "Emerging From The Netherworlds" seem to be everybody’s favorites. The last contains dusty old school Euro Death Metal with some thrashing madness into it. Where "Angelic Encounters" is a technical and well composed example of "modern" old school Euro Death / Thrash. Most of the main riffs have a thrashing feel to them, together with the decomposed growls from Gebédi, and the punishing drumwork from Aad Kloosterwaard. The overall atmosphere on the album is as dark as the previous work, though not as heavy and doomy, it is much more straight forward with more focus on great guitarwork, and not as much on heavy and evil rhythm patters. And then there is the technical twist, the guys showcases how they can twist and turn their music, and still keep it real and atmospheric. "Beyond Terror", inspired by one of the more scaring horror flicks The Beyond, holds one of my favorite tracks from this band, ‘L’aldila – Beyond Terror’ which also is on "Undead.Unholy.Divine.", an atmospheric and chilling encounter with the macabre and a trademark of how THANATOS masters putting atmosphere into music and out through the speakers, not many bands master this as well, as these maniacs. Atmosphere is what "Beyond Terror" is packed with, dark and enticing Death Metal, darker and more grim than "Angelic Encounters", a small step back in time, and closed with two good renditions of a couple of classics. ‘Satan’s Curse’ from POSSESSED and ‘Into The Crypt Of Rays’ from CELTIC FROST, both delivered as they should sound, with the right feel and punch. If you didn’t get hold of the AreaDeath re-release of this album, which is a tad cooler, as it contains loads of bonus material as old demos and such, then the Century Media re-releases of THANATOS are quite nice as well, due to the remaster and wee bits of bonus material. On top of what it all is about, the albums, history of European Death / Thrash from one of the finest purveyors of such, the mad Dutchmen lead by stalwart Stephan Gebédi, who has been delivering this kind of music with flaming passion since the beginning of the 80s, I was five years old when THANATOS began their adventure, today I am 34, so, so far he has been delivering extreme Metal for 29 years, and hopefully he’ll continue a good while. For now it is announced that we will get a new album next year, to mark 30 years of blasphemy! Though if you already have the originals, hold your horses and wait for the new spawn from the band, unless you are a sucker for Dan Swanö’s punch! All further information at www.thanatos.info, www.facebook.com/pages/thanatos/150901861608686, www.centurymedia.com