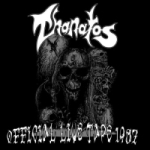 This is like a history lesson in how the Death / Thrash movement in Central Europe actually started in the late 80s. I must say that I’ve never been the biggest fan of Dutch THANATOS, although there’s no doubt that they have been active mainly close or even longer than ASPHYX or PESTILENCE and their success got mostly ruined by Shark Records back then. Musically I always preferred the latter two, but to treat THANATOS with respect, this release is a total cool relict about their very early recordings captured on a soundboard recording. The quality is quite cool (for being a 24 years old live recording) and the release itself comes with some liner notes, a re-designed version of the original tape coverartwork, photo gallery etc., so it’s a true fan release and a goody for those who (still) miss the early days of MESSIAH, DEATHROW or DARKNESS (incl. white baseball sneakers and mustaches). www.thanatos.info, www.myspace.com/konquerorrecords