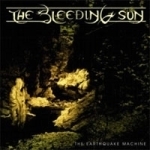 The Bleeding Sun is a band from Barcelona that has been around for some time now in the Spanish underground (since ’96), and has in its history one single and three self-produced albums (including this one). And even if they deliver a good live show, it seems they haven’t achieved to take off completely. But considering their quality I bet this will change soon. Even if I try a bit vast and not too much specific, the best term to describe their music would be “Avantgarde”, which can surely give you an idea of which kind of courses they are taking. Starting from an aggressive and a bit technical Black / Death Metal base (some riffs in the first track reminded me of some stuff from Cannibal Corpse), each of the songs has a totally progressive development, with a lot of variation when it comes to the tempos and influences they have. The guitars are heavy and from time to time you’ll get to hear some melodies. But usually this is the job of the keyboards, which are occupied as much in creating some atmospheres, slightly pompous and grandiloquent (and very dark) as some piano passages. The drums are in charge of the most extreme part, which add the most brutal touch to the ensemble, and the performance is excellent. It can’t be denied that they received a high influence from Norway’s Arcturus and something from Dimmu Borgir on their last works, among others, especially when you hear the clear vocals from Mr.Uryol (bassist of the band). They are almost identical to those of Vortex. But there’s a big difference between both bands, which is the already mentioned aggressiveness. It is a lot more present in the music of these guys, as the riffs, even if being constantly progressing, keep striking on a quite brutal level, without entering too much mystical deliriums. And, in case somebody was having any doubts about the production of this CD because it is self-produced, forget that. It was recorded at AXStudio in Barcelona, owned by an ASGAROTH member, and best known because of other albums from ASGAROTH or NEMESIS AETERNA (in fact, the guitar player of this band is playing here too), amon others. A powerful and clear sound, keeping a slight touch of chaos not to loose the weight, and still with every instrument well defined and, especially, a good work on the vocals. Don’t hesitate to take a listen to this if you’re into what I described before, as they did a really good job and everything on their own. www.myspace.com/thebleedingsun