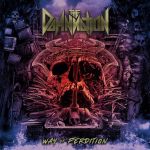 Brazil’s THE DAMNNATION, after two singles and an EP, have released their first full-length “Way Of Perdition” since forming in 2019. It’s always exciting to hear all-female bands these days, to even out the usual male-dominated genre. Renata Petrelli (guitar, vocals), Aline Dutchi (bass, backing vocals) and Luana Diniz (drums) have delivered a Thrash / Death album that isn’t bad, but brings nothing new to the table either. ‘Before The Drowning’ opens up the album with a nice guitar / drums chuggathon that is skillful and talented in its musicianship. The throaty vocals are a nice touch. The track’s good and solid, but somehow a little unenergetic. It’s hard to describe. ‘Way Of Perdition’ is a faster paced track that, still, demonstrates the talent of the guitars and drums, but for some reason just doesn’t quite explode. That’s not to say it’s unenjoyable by any means. It’s actually quite fine. But it’s… missing a little something. The third track ‘Into The Sun’ has some nice riffs. But one thing you start to notice after a few tracks is that there isn’t really much variation in the vocals from song to song. Maybe a little diversity in the growls could bring more spice to the album. From the swirling, chain-like riffs in ‘This Pain Won’t Last’, to the old school 80s guitars of ‘Grief Of Death’ to the anthemic ‘Random Words’, the album progresses rather well. Each track individually is pretty enjoyable and head-bangable. Combined together, on the other hand, doesn’t overall bring much to the table in terms of breaking new ground. Matter of fact, maybe the production itself is a little too smooth, with no jagged edges to give it the extra punch. The rest of the album continues with the same style of vocals and solid instrument-playing. “Way Of Perdition” is ten tracks of absolutely fine Metal, but nothing that will knock you on your ass. Here’s hoping that next album will feature a little more in-your-face production and some variety in vocals to give it the kick in the pants it needs to bring more recognition to THE DAMNNATION. For more band information, check out www.facebook.com/thedamnnationofficial, label contact: www.facebook.com/soulsellerrecords