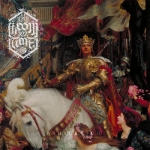 Australia’s THE LOOM OF TIME is an amalgamation of different genres (blackened Death / melodic Death / Thrash). It’s a little difficult to pinpoint the exact direction the band is taking with "Nihilreich", but it’s definitely an enjoyable ride. ‘The Ashes Of Your Fall’ begins with what could best be described as a Layne Staley vocal style before flowing into a melodic Death Metal rhythm and growls. It consists of s strong force of epic guitars and pounding drums. ‘The Pinnacle Of Hypocrisy’ leaves subtle hints of Black Metal with a definite ability to mesh Thrash and Death melodies throughout. ‘The Cries Of The Weak’ slows things down slightly with a thrumming, chugging guitar assault before bleeding into doomy-style vocals. To be honest, Matthew Ratcliffe’s chameleon vocals are all over the place on this album, showing his uncanny ability to sing / scream to the level he needs to bring to the forefront. The fourth track ‘The Greed Of Lesser Men’ starts slow, then quickly peaks at a mind-numbing breakneck speed before relenting to a sweltering mid-tempo bliss. ‘The Peons Of The Cosmos’ stomps and wades through a thick mire of war-torn angst and victory before settling in to a satisfying steady, almost Power Metal track. The final ‘The Fight Of The Subhuman’ has a faint nod to DARK TRANQUILLITY, evident in its melody and deliverance, whether meaning to or not. The slowed down end to this album wraps everything up nicely in a tight, yet varying package. You may not feel the need to headbang the whole journey through this album, but you will cruise along highways both uphill and down, taking many paths into obscure corners of the land, feeling both refreshed and satisfied. For more information, check out www.facebook.com/theloomoftime, https://theloomoftime.bandcamp.com, www.atmf.net