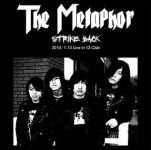 THE METAPHOR from Beijing, China, might as well be the country’s hottest and most intensive sounding band out of all Thrash Metal acts nowadays that you can find crawling out from the Chinese underground Metal scene. In fact, the band sounds even better – more brutal and vicious live than on a studio record. THE METAPHOR performed live at Club 13 in Beijing in the mid of November 2010, and this recording was captured for a live recording, to be released later on Chinese label Dying Legion; a sub-label of Dying Art Productions. But be warned, this is no soundboard recording or anything close to that quality but merely like the kind of recording some Chinese Thrash Metal fan has brought his mobile (or some other recording equipment) to this particular show back in 2010, and then captured the band’s whole performance into his own recording, from start to finish. In fact, THE METAPHOR’s live recording reminds me greatly of the tape trading times; the quality of this live recording is actually on a very amateur-ish level, which however, isn’t all that disturbing for me personally as I kinda got used to this type of live recordings when trading tapes tapes actively some 20-25 years ago. But I also do understand this low-fi recording may easily turn some of your ears away from it instantly if you have used to hear everything through a modern and polished filter. You shouldn’t bother then, I guess. But what this live recording is, it truly exposes a full scale Thrash Metal band that THE METAPHOR undoubtedly is – and all that unrelenting energy and aggression there’s in this Chinese Thrash troop, ready to be unleashed toward all of us. THE METAPHOR plays the brutal side of Thrash Metal à la early SLAYER and DARK ANGEL, so you may well get an idea how they might sound live. Hearing them playing live via this disc, made me very convinced about these Chinese Thrashers’ true live potentiality. If there ever was a chance, I would buy a ticket to see THE METAPHOR live without any hesitations, that’s for sure. They must be a pretty impressive live act, just basing my opinion solely on this live recording from them alone. Find more about these Chinese Thrashers here: http://site.douban.com/themetaphor, label: www.underfm.com/dyingart/english/discography/trade.htm