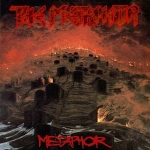 China is pretty much the kind of country that doesn’t enjoy much of the international limelight when it strictly comes down to the music scene of this particular country in question, especially when overall talking about the Chinese Metal scene, put under a huge magnifying glass for further inspection. Sure thing is there must be thousands and thousands of Metal bands in China that none of us ever even hear of, so every time when one comes across a new Chinese name in Metal in particular, it somehow excites you to some strange degree, doesn’t it? THE METAPHOR, this 3-piece act is such a Metal act, yet a completely new acquaintance to me as well. No doubts, this Chinese trio has surely heard its SLAYERs for about zillions of times – and overall I can hear out of their stuff on this 9-track record called “Metaphor”, how much the guys love both American and European Thrash Metal. They surely are a bunch of devoted Thrash Metal fans, which is great and all that. After an unfortunate dull and boring bass intro, THE METAPHOR try to let all hell break loose, but unfortunately their own hellish crossfire in the Thrash Metal genre particularly, just isn’t scary enough. I mean, as much I wanted to like them, without any prejudices or anything – with all of those clear SLAYER-esque elements sticking out of their songs, the band’s performance ends up being very amateurish all in all, which is a pity. I understand they do try sound mean and serious as hell but sadly they aren’t able to do so. At least they have a serious attempt at that in a song called ‘Rising After Execution’, which sounds pretty nasty and wicked, if you can just ignore the song’s lyrical contribution completely of course! To better THE METAPHOR’s situation just a little bit, vocalist and bassist Li should hand over his vocal duties to someone else who can sound convincing with Thrash Metal type of vocalism, the band should rehearse more often and determinedly to get some more hairy adult’s balls into their stuff – and first and foremost, they should try to learn some English too because they seem to lack drastically some basic grass root skills in English. Not that I should care ’bout any of that at all but at least please do not put your lyrics available anywhere if the only thing what they really do is to make you feel sorry for the guys in THE METAPHOR, and tend to make you grin widely. Also, their cover version done for MORBID SAINT’s song ‘Beyond The Gates Of Hell’ doesn’t really help their situation to stand out much either, to break THE METAPHOR’s name better into the international Metal music markets. Wish them all the best though for trying. THE METAPHOR: www.myspace.com/metaphorthrash, label: www.underfm.com/dyingart/english/discography/trade.htm