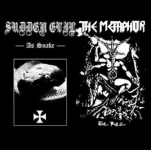 A split release of 2 Chinese underground Metal bands, THE METAPHOR (featuring Wu and Li respectively) and SUDDEN EVIL (one-man band, Snake being responsible for all the instruments), should always raise a few pairs of eye browns out there, just for the sake of sheer curiosity, right? It does, I can tell. Even I was pretty excited to play this disc in my cheap and used Dantax player, which I bought from one second-hand store quite some time ago already. First on this split is a 5-track presentation from THE METAPHOR that is ought to play some sort of blackened Thrash Metal. Well, in fact they do but they really don’t manage to shine in their own part of this split. They have got a few nice, SLAYER-ish riffs here and there and wicked solos incorporated into their songs but unfortunately those riffs and shit alone don’t save them to become a pretty forgettable act eventually. The only exception is their version done for DARK ANGEL’s song ‘Dark Descends’, which is played live but sadly the song itself suffers from a pretty bad live sound. One-man Black / Thrash Metal act SUDDEN IMPACT is clearly the better act out of these 2 Chinese bands presented on the disc. A guy behind the nickname Snake, has somehow succeeded in creating a decent sounding wholeness around his one-man army called SUDDEN EVIL, at times making it sound like he’d have a real band hired for his Metal crusade over China. The mixture of piercing Thrash riffs, high-pitch screams and Black Metal snarls, lots of intensity and ability to write something worth a listener’s attention, he has got them all for SUDDEN EVIL – and obviously he knows already where he is good at: to write a pretty decent sounding blackened Thrash Metal, although there’s still lots of work to be done to prove him vocally too. Also, his cover version done for KREATOR’s ‘Pleasure To Kill’, is very honestly said simply a horrible attempt to do something worthwhile cover wise. More band info at: site.douban.com/themetaphor, site.douban.com/suddenevil, label: www.underfm.com/dyingart/english/discography/trade.htm