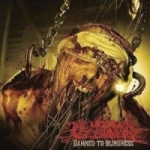 Full power to the engines, prepare all weapons, let the killing begin – these words are the perfect introduction to “Damned To Blindness” the debut of THE MODERN AGE SLAVERY. The band has been founded in 2007 and is heading from Italy to demonstrate that not only German bands like MAROON or HEAVEN SHALL BURN are in the position to set the roof on fire. So the direction is more than clear – head banging and circle pit potential at the absolute maximum (at least at 150%) and drum impacts behind every riff. I think that some old school Death Metal fanatics will have their problems with the so called Deathcore style (including myself) because some bands just arranging their music to properly forfill the style requirements but from time to time I need these kind of musical adrenaline as long as the release is as good as “Damned To Blindness”. This debut will disappoint not a single soul because the album is offering 40 minutes of powerful Death Metal plus a nice ENTOMBED cover (‘Wolverine Blues’) which is building in some way a bridge between old / new – so please take cover and prepare for impact. www.napalmrecords.com, www.myspace.com/themodernageslavery