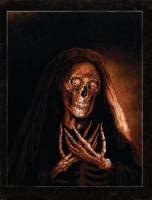 Kam ‘The Tyrant’ Lee does not need much introduction, does he? The man became most known for his band MASSACRE; now a defunct US Death Metal act that has an important role in the Death Metal scene in general. Kam’s latest incarnation of all heaviness and brutality goes under the THE SKELETAL moniker – and it’s no surprise if I tell you the band counts on the past recipes of Metal music, i.e. old school Death Metal that also has some tiny elements from both Thrash and Black Metal mixed in for a good measure. Besides Kam ‘The Tyrant’ Lee on vocals, the band features Kjell and Lasse on guitars, Ulgnor on bass and Brynjar on drums. The band is located in Florida, USA, but it looks very much like THE SKELETAL has a Scandinavian line-up, just having Kam Lee taking care of the vocal duties. What comes to THE SKELETAL’s debut 9-track offering, “The Plague Rituals”, which has now been released on German Metal Inquisition Records (and obviously is also nearly sold-out by now due to its very limited quantities), the album is loaded with chunky and meaty riffs, beautifully played solos, strongly audible bass lines, Kam’s powerful yet trademark-ish vocal style, lots of variety from faster to heavier song parts, etc. – all done in the old school fashion that should undoubtedly make the fans of Kam Lee pleased and happy by what they are about to hear. To me personally, THE SKELETAL is the probably best ‘project band’ that Kam has put together thus far. I have basically liked everything he has done since the days of MANTAS, DEATH and MASSACRE – including all of his ‘project bands’ from THE GROTESQUERY to DENIAL FIEND, but out of all these so-called ‘projects’, THE SKELETAL has appealed my likings most due to having a good load of Thrash Metal incorporated in. In terms of creativity, the songs don’t offer anything groundbreaking or new any more, but recycling already safe and used formulas that ain’t any crime either. So why not staying inside this secure and already familiar area with all of those ingredients that you can do best – rather than trying to be innovative and highly original for the sake of more artsy-craftsy values and therefore perhaps even failing miserably in the end? “The Plague Rituals” is a good record; it does not surprise anyone any more by what it represents content-wise, but it’s still a darn good slab of old school Death / Thrash Metal nonetheless that always tends to raise some nostalgically grey eyebrows in people’s foreheads for the jolly good old times. www.metal-inquisition.de or http://kamleerants.blogspot.com