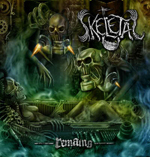 A multinational Death squad, that after releasing a very solid album with none other than the mighty Kam Lee, once vocalist for DEATH and MASSACRE. This new EP with 5 invocations of cadavers covers absolutely no new ground, yet it is well done if maybe a bit too modern sounding like in ’Once Upon A Murderess’. Although the members that have been involved with this band or project have been playing in acts like HOODED MENACE and THE GROTESQUERY, I was actually expecting a bit more in the end. There is a strong CELTIC FROST vibe with songs like ‘The Screaming Skull’, so we are basically talking of mid tempo crushing Death Metal, with a few blast beats here and there. If you have been a fan of Kam’s vocals this will not disappoint you, and the music coming with it is also good too, still, after tasting the bones and marrow, I have been left with the impression that what is left I really that… bare bones of what once was more. www.facebook.com/theskeletal, www.metal-inquisition.de

Julian “The fetid one” Nunez

Julian “The fetid one” Nunez