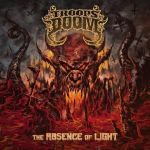 THE TROOPS OF DOOM
The Abscense Of Light
(Repulsive Echo Records)
25:52min

Thrashing madness from Brazil, we’ve heard that quite some times before. I don’t know what they have in their water over there, though they have been stable deliverers of hard fueled Thrash throughout 3 solid decades now. There are old mastodonts still thrashing on, newer bands kicking arse and then some from the original scene forming a new entity here and there. THE TROOPS OF DOOM is a quite new band, formed by one of the veterans from the Brazilian Thrash Metal scene, the one and only Jairo “Tormentor” Guedz, who wrote and shredded guitar back when SEPULTURA was a part of the youthful thrashing Black Metal scene in South America. He was tormenting (pun intended) the six strings on the two monumental releases “Bestial Devastation” and “Morbid Visions”, which makes the “new” version of ‘Antichrist’ on this release even more fun and almost more striking than the original. He is joined by a young and promising drummer in Alexandre Oliveira and two seasoned musicians in Mantus on guitars and Alex Kafer on vocals and bass. Musically we aren’t getting much new under the sun, just pure and straight forward Thrash made on a good a hooking rhythmic foundation, some killer riffing and great vocals, how hard can it be? We are getting an intro and 2 new tracks ‘Act I – The Devils Tail’ and ‘Act II – The Monarch’, the very old school sounding, I like it, very catchy, fast and to the point, a banger that will work really well live! The second track is a tad more epic, to still quite banging and hardcore thrashing, a really hooking main riff, smashing drums and brutal vocals and awesome guitar leads. The second side of the tape offers the already mentioned cover version, or is it just called a re-recording when it’s done by Tormentor? And demo versions of the two tracks from the A side. I really dig the sound on the demo recordings, much rawer and fitting for the material in my opinion. The sound and feel takes me straight back to the olden days, when everything was more fun and brutal! It is almost like Øystein G. Brun, who has mixed and mastered the A side, made the material too polished, which takes a tad of the fierceness of it. The vocals have been dragged somewhat back, compared to the demo, together with a sound effect, which makes the vocals sound a tad machine-like. Join the bestial devastation: www.thetroopsofdoom.com, www.facebook.com/thetroopsofdoom, www.repulsiveecho.com