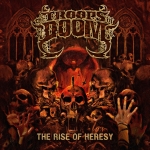 THE TROOPS OF DOOM
The Rise Of Heresy
(Repulsive Echo Records)
22:23min

The first EP of THE TROOPS OF DOOM is definitely one to check out, especially because of one member, namely Jairo “Tormentor” Guedz. He is mostly known from his work on the very early SEPULTURA releases. “Bestial Devestation” and their first LP “Morbid Visions” are two huge releases that made their mark on both Thrash and Death Metal and influenced many bands in the years after. The promo notes state the EP revisits the essence of ‘80s style Death Metal, exploring a more primitive sound that takes listeners back to that era, while remaining fresh and genuine and I would argue this has been achieved in spades. Comparisons will always be made to SEPULTRURA and that is inevitable. Outside of the early SEPULTURA influences, “The Rise Of Heresy” takes inspiration from the usual suspects like early SLAYER and CELTIC FROST, and even a bit from INFERNAL MÄJESTY. These traditional influences come together to create a archaic, mystical, downright diabolical Death / Thrash assault that’ll rip your head clean off and demand that you crank it to 10. The four newly composed songs that flow through the first two-thirds of this darkened excursion lean towards the rapid fire chaos that was typical of 35 years ago followed by excellent cover versions of ‘Bestial Devastation’ and ‘Troops of Doom’. This is a very cool release. www.facebook.com/thetroopsofdoom, www.facebook.com/repulsiveecho