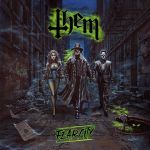 Whew. Ok, this is a tough one to wrap my head around. So I’ll just jump right into it. Back in 2008, vocalist Troy Norr formed THEM as a KING DIAMOND tribute band, hence the band name. Eventually, the band evolved into writing their own songs but maintaining the theatrical side of the band. It’s very evident on “Fear City”, the band’s fourth full length, that the KING’s influence has maintained its dominance a decade and a half later. But… although the band of Troy, Markus Ullrich (guitars), Markus Johansson (guitars), Alexander Palma (bass), Steve Bolognese (drums) and Richie Deibel (keyboards) are all quite talented in their musicianship, is their sound really what fans wanna hear? The opening track ‘Excito’ is an electronic intro that already creates confusion in what exactly we’re listening to. ‘Fight Of The Concorde’ is DRAGONFORCE on mushrooms. A high pitched scream (like MR DIAMOND) permeates in the background as the normal vocals erupt, sounding like MERCYFUL FATE on Broadway. The guitars are fantastically played. The drums are on point. But the theatrics are even a little more over the top than the band they’re influenced by. Locations play a big part in this story, with tracks such as ‘Welcome To Fear City’, ‘Graffiti Park’, ‘The Consecrated House Of Sin”and ‘Death On The Downtown Metro’. And as much as we can easily hear the influences in here, and as theatrical as KING DIAMOND could sometimes get, it’s really nothing compared to this album. I mean, it’s wayyyy over the top. And there’s a silliness to it when different character voices appear. And though talented, there’s a cheesiness to the band that far outweighs the heaviness, overpowering it to the point of it almost being campy. Now granted, Metal can easily be tongue-in-cheek with its lyrics. But you know what? There was a coolness to KING DIAMOND. Here on “Fear City”, there appears to be muppets and possibly Cheech and Chong. Who the fuck knows. So… Like I indicated, this is difficult. Skillwise, the band simply are incredible. Vocally, Troy can sing any note he desires. But I like to think that many Metalheads will get distracted by all the thrown-in voices and silliness and kindly put it aside. Then again, maybe I’m completely wrong and THEM will shine in the ears and eyes of their listeners. For more info, check out www.facebook.com/thembandofficial, www.facebook.com/spvsteamhammer