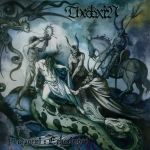 Our Austrian neighbours are not known for a huge scene. Just few bands come from there in comparison, but they often released great stuff. Now we have the fairly new THETOXIN from Vienna, who already released two albums in their four years of existence prior to this release. “Fragment: Erhabenheit” now is the third full strike of this very productive melodic Black Metal act. And listening to this album, you’ll soon notice that these guys are pretty experienced and skilled musicians, as all of them played in other bands before starting (or joining) THEOTOXIN. These musical skills are definitely one of the strengths of the album, as they have proven a recipe for intensity. And intensity is what really makes “Fragment: Erhabenheit”. Musically, THEOTOXIN is pretty much inspired by the old school of melodic Black Metal, mainly DISSECTION and EMPEROR come to mind. Raging guitar harmonies meet elaborate riffs, based on variable drumming full of breaks and speed changes. Thus songs like the opening ‘Golden Tomb’ or the rather long and a little epic ‘Prayer’ are very enjoyable and make “Fragment: Erhabenheit” a great album for those who miss the days of old. Or those, who in general dig fine and exquisite Black Metal. Give THEOTOXIN an ear and visit them at www.facebook.com/theotoxinofficial or their label at www.aoprecords.de