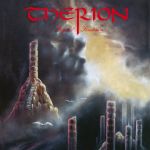 In the last roundabout 25 years, THERION received a lot of attention, appreciation and success with their pretty unique mix of Metal, Opera and Symphonic music. Yet there was a time in the career of mastermind Christofer Johansson when the name THERION was known for more extreme sounds. The band started in Stockholm at the end of the 1980s already and fitted damn well in the developing early Death Metal scene in Sweden. The first THERION album “Of Darkness…” (after two demos and a 12″ EP) was released in 1991 and featured classic Swedish Death Metal of the early era, including the inevitable Thomas Skogsberg recording qualities. Three more albums followed before THERION released their game changing album “Theli” in 1996, showing the transition from the old school to the recent sound of the band. Now most of the recordings of this era are available again via Hammerheart Records, with only “Of Darkness…” missing, supposedly due to contract reasons, as said album was originally released by the Peaceville sublabel Deaf Records. Thus anyone interested now has the chance to get the, in my opinion, most interesting THERION stuff again. This includes, of course, the second album “Beyond Sanctorum”, that was released in 1992 and broke the habits of Swedish Death Metal back then. Recorded at Montezuma Studios, “Beyond Sanctorum” featured a lot of fresh and unusual ideas that broke the mould of classic Death Metal. Christofer Johnsson and his then allies added a lot of different ideas to the sound of THERION. Techno Thrash, especially in the vein of VOIVOD, was a huge influence for the album, just listen to the fantastic ‘Pandemonic Outbreak’ or ‘Illusions Of Life’. Or take ‘Cthulhu’, which offers a huge nod to VOIVOD as well as some doomy moments – definitely the highlight on “Beyond Sanctorum” and a highlight of the early 1990s Death Metal scene. Some moments also heralded the things to come some years later. ‘Symphony Of The Dead’ shows some early experiments of THERION with keyboards, Doom Metal and Opera, embedded in the context of Death Metal and better than everything THERION recorded later. With the 11 minutes long ‘The Way’ the guys showed all the facets that made the sound of THERION back in the day, a summary of the album, so to say. So this is a re-release absolutely worth having if you’re into the early days of Death Metal and don’t own “Beyond Sanctorum” already. For those of you who look for bonus tracks: this new edition shows the album in its purest form, as only ‘Tyrants Of The Damned’, the original bonustrack of the CD edition, is included, a song that didn’t completely keep the high standard of the album. For more information visit www.facebook.com/therion and www.facebook.com/hammerheartrecords.