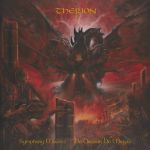 The recent republication series of nearly all pre – “Theli” releases from THERION also features their third album “Symphony Masses: Ho Drakon Ho Megas”, that saw the light of day in 1993. Just one year after the groundbreaking album “Beyond Sanctorum”, Christofer Johnsson entered Montezuma Studios again with a completely refurbished line-up to record a new album that partly followed the path beaten with the predecessor, yet also expanded what THERION stood for. More melodic and harmonic parts found their way into the songs. And the overall basic speed was also slowed down, making room for some more mid tempo and doomy parts. With the addition of some more keyboards, THERION had a way more epic and symphonic appearance, even though they were still far away from their later style which is sometimes more symphonic than an orchestra. Songs like ‘Dark Princess Naamah’, ‘Symphoni Drakonis Inferni’, the two acts of the title track and partly ‘The Eye Of The Eclipse ‘ are two great examples for this. The instrumental piece ‘The Ritual Dance Of The Yezidis’ even goes a little further, as it deeply based on middle eastern folklore and even features Jazzy elements. On the other hand, we have songs like ‘Dawn Of Perishness’, ‘Powerdance’ or ‘Procreation Of Eternity’. These are more based in classic and even proto Death Metal, hinting on older CELTIC FROST stuff (“Into The Pandemonium” era) as well. Thus there’s a little foreshadowing of things to come on the follow-up album “Lepaca Kliffoth” two years later. Listening to the album again after more than 15 years, I have to admit that “Symphony Masses: Ho Drakon Ho Megas” aged not as well as its predecessor. In my remembrance of the album, I was a little more enthusiastic about it when it was released. Yet it still is a pretty fine album that shows the progression THERION made from a classic Swedish Death Metal band to the Symphonic Opera Metal they stand for today. Just like with all the other THERION re-releases on Hammerheart, “Symphony Masses: Ho Drakon Ho Megas” comes along in its original appearance without any maybe uninteresting extras. But it might also be possible that there wasn’t any stuff worth adding as a bonus. For more, visit www.facebook.com/therion and www.facebook.com/hammerheartrecords