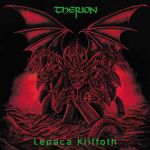 Even though “Of Darkness” is always gazed as a classic, THERION were drifting away from their Death Metal roots with their unorthodox inclusion of keyboards. And, history says, NOCTURNUS was the only Death Metal band that had done that before. “Beyond Sanctorum” (1992) followed suits, and then their era of bewildering experimentation began. No more bee swarm or chunky grooves to possess and rolling heads. Stepping in, strangely traditional Heavy Metal down picks and synth fused song structures. Conventional, but with an undeniable dark feeling. While “Symphony Masses” turned out to be extremely experimental with Gothic, Prog, Jazz, Industrial music and 80s Heavy Metal, their imminent fourth full-length release “Lepaca Klifforth” from 1995, was basically a bit straighter and more aggressive, especially when it comes to the guitar work. Adding the enticing bass-baritone voice of Hans Groning and the soprano singer Claudia Maria Mokri, who has already refined CELTIC FROST albums with her voice reinforced the diversity of the album. Also, the dominance of keyboards, more Persian influences, more progressive melodies, Fredrik Isaksson’s ever flowing basslines, Christofer Johnsson singing a newer hardcore way – established the combined songwriting and inventive prowess of the group. Beginning with ‘The Wings Of The Hydra’, ‘Arrival Of The Darkest Queen’, ‘Riders Of Theli’, ‘Darkness Eve’ and progressing towards the end with ‘Let The New Day Begin’, ‘Lepaca Kliffoth’ and ‘Evocation Of Vovin’, all will make their stances upon each listening. Interesting enough, ‘Let The New Day Begin’, reminds of some DESULTORY moods from their timeless classic “Bitterness” and one may wonder, if THERION may subconsciously have dived into their bygone roots for an instance. Also, their inclusion of the ‘Sorrows Of The Moon’ cover, exhibited a THERION style nod to their eternal god CELTIC FROST. During 1995, when many of their contemporaries, were rooted deep in the extreme Metal spectrum, Christofer Johnsson and Co. decided to broaden their horizon to bring forth all their musical influences to such an extent that, despite their complete stylistically departure (which rightly unfitting to many), onlookers and open-minded fanatics can always find many things to ponder upon all sorts of classical references and can conceive all eleven songs with renewed interpretation. Notably, this record also beholds a production appropriate to their multi-faceted, partly dark symphonic Death Metal in the broadest sense. Enticing news in that sense for the old or newly exposed souls, this record comes alive again as part of Hammerherat’s THERION re-release offensive in the remastered CD version (with startling double bonus tracks) now and then the LP version a little later. Explore more about the band and label here: www.facebook.com/therion, www.facebook.com/hammerheartrecords