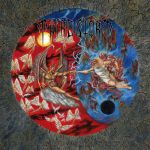 THIRD STORM from Sweden are more or less actice since 1986 and their founding member and vocalist Heval seems to have resurrected this old project in 2014 with some experienced new members. So it is no surprise that their first full-length sounds pretty matured, even though their musical direction is not always that easy to describe. The opening track ‘Prima Mobilae’ is starting with the typical 90s melodic Death / Black Metal, showing some traces of mighty SARCASM, the other project of two of the members of THIRD STORM. A very good and solid song with with fast drumming, the typical grunted caws and melodic guitar lines somewhere between the mentioned SARCASM and DAWN but with a good doze of slow Doom / Death. ‘As The Stars Watched The Birth Of Eternity’ continues this way with some really cool guitar tunes and reminds me heavily of the first UNANIMATED album with the same groovy rhythm guitar section. The first step out is the third track ‘The Third Thought From The Sun’ which does not fit at all to the first tracks as this is classic Doom / Death with some Black Metal caws reminding of bands like ANATHEMA and very old PARADISE LOST before this song goes back to melodic Death / Black at the end. ‘Sapiens Formuale’ is a keyboard driven chanted instrumental interlude. ‘Forgotten Deity’ is another difficult track, as it soundwise is a bastard of both styles, Doom / Death and melodic Black Metal with guitar tunes in the vein of ABLAZE MY SORROW or even old AT THE GATES. ‘Forgotten Deity’ starts with some silent Folklore strings before another bastard between Black Metal and slow doomed tunes in the vein of KATATONIA appear with a really cool lead melody carrying this song. Same goes for the remaining tracks. All in all a pretty good album which could have easily been released on No Fashion, Black Sun or Wrong Again in the 90s what unfortunately forces me to buy the album. Fans of the mentioned style and bands should check these veterans out via the following sources: www.facebook.com/thirdstorm, www.darkdescentrecords.com