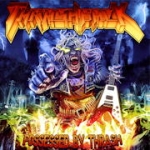 First, as a little background information, THRASHBACK is a relatively new Thrash Metal group coming from France, formed by 3 ex – EVIL ONE members in 2012. After getting 15 years of experience by playing Thrash Metal in EVIL ONE – and facing some serious line-up problems during their career, it was time to call it quits for EVIL ONE, and move on towards new musical opportunities. Well, having had playing Thrash Metal in your blood for such a long time as 15 years, it’s obviously pretty darn hard to move out from this Thrash Metal box to completely something else music wise. THRASHBACK is about old school Thrash, the Teutonic style of Thrash Metal in particular. Due to Fabien ‘Speed’ Cortiana (on vocals and drums), he’s like KREATOR’s Ventor and Mille Petrozza in one person actually. He plays his drums relentlessly like Ventor on KREATOR’s "Pleasure To Kill" – and at the very same time he sounds like a younger version of Mille (maybe a bit like Pat Ranieri of Floridian HELLWITCH also). What THRASHBACK do on their cleverly titled debut opus "Possessed By Thrash", in all honesty’s sake this is kinda ‘play it safe’ type of Thrash Metal, relying on some of those 80s familiar elements that overall made Thrash Metal as its own genre of Heavy Metal music, to sound so great and fascinating about 25 years ago. KREATOR’s influence on the THRASHBACK camp, comes out striking and immediately – and in a way it’s all cool for sure. But there’s a tiny problem: if you were forced to choose between "Pleasure To Kill" or THRASHBACK’s "Possessed By Thrash" record, I bet it would be pretty obvious which of these 2 particular albums in question would pick up the winner’s card eventually, right? A cover version of EXCITER’s ‘Pounding Metal’ in the end of this album (featuring no less but ex – EXCITER shouter Dan Beehler himself), sounds pretty neat though. More information on THRASHBACK at: www.facebook.com/oldschoolthrashback, label: www.emanesmetalrecords.com