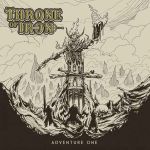 THRONE OF IRON
Adventure One
(No Remorse Records)
42:27min

The United States of America, the year 2020 AD. The whole nation seems to be occupied by Trumpism, boring charts music and modern trends in Metal. The whole nation? No, four guys from Bloomington, Indiana still resist the invaders! They gathered in 2018, inspired by the sad passing of Mark “The Shark” Shelton, and chose the name THRONE OF IRON. Since that day they started to release songs, a lot of them as digital singles, but also a demo and a split release. This year not only saw the release of a compilation featuring this stuff, but also the release of the first full length album from THRONE OF IRON, conveniently titled “Adventure One”. And this first adventure turns out to be what can be expected from a band with a name and a genesis like this. THRONE OF IRON are pure Heavy Metal with a bias on epic song writing and a variable, yet not too fast overall speed. Somehow I feel reminded of acts like AXEHAMMER, MANILLA ROAD (of course) or OMEN and some bands that came from the US in the second half of the 1990s. And even though “Adventure One” is not a revolution in Metal, it is a more than solid album. Maybe it seems a little bit like it’s fallen out of time, as the production is a little bit dated, making it sound like it was recorded more than twenty years ago. But that does no harm to the quality of songs like the opener ‘A Call To Adventure’, a timeless Power Metal song with its tongue-in-cheek intro. And the epic ‘Past The Doors Of Death’ is a song everyone into Classic Metal will surely love with the mighty and long chorus. And believe me, the other songs on “Adventure One” are a bit of all right as well. So, anybody out there with a preference for Classic (or True) Metal and old geezers like me should check www.facebook.com/throneofiron or www.noremorse.gr