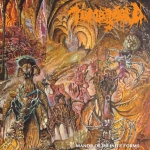 TOMB MOLD from Canada are active for two years only and already unleash their second output "Manor Of Infinite Forms". Unknown to me before, I already saw comments about the album on Facebook some days ago and was curious to hear it. The first tunes of the opening and title track ‘Manor Of Infinite Forms’ already sound quite promising. A memorable guitar tune turns into old school Death Metal in the vein of the old Finnish scene but very groovy and a bit Death’n’Roll inspired. But especially the deep guitars and the even deeper grunts already reveal the roots of these Canadian warriors. In the middle part they speed up and really start kickin’ serious ass. The second track ‘Blood Mirror’ continues this direction but far heavier and faster. The influences of DEMIGOD, DEMILICH, ABHORRENCE and CONVULSE have been carefully incorporated into their sound but not simply copied. For that ‘Blood Mirror’ or ‘Abysswalker’ with its cool hookline sound unique and fresh too. TOMB MOLD really manage to bring some fresh breath into this old sound and really remind me, why I will never stop loving this rotten sound. Especially the groove incorporated in their tracks really makes this output a varied trip. I really liked "Reflections" of CONVULSE back in the days while a lot of people could not dig that groovy direction. Good to hear that nowadays groove and hardness can be combined that easy. What else can I say? The production is clear and powerful and all tracks are on a pretty high composition level and considering the mass of releases of the guys within two years, the band seems to be on their creative peak at the moment. Enriched by a cool old school cover, this output is reason enough, why we will continue with Voices From The Darkside until we die. Go and grab yourself a copy of "Manor Of Infinite Forms" via one of the following sources: www.facebook.com/tombmold, www.20buckspin.com