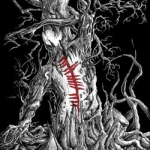 Coming out from nowhere it seems, this is the debut album form this Pagan / Black Metal band from the Czech Republic. The members have been actually active in another Black Metal, SEZARBIL, that was formed in 1997, and one member is also active in INFERNO, so newcomers they are not. The music found here is done in their native language giving them that exotic touch, and sounding like early ROOT or MASTER’S HAMMER. In fact musically speaking both aforementioned bands can be cited as influences here, but also there are traces of Death and Thrash Metal all around. There is actually quite a good use of melody here and there, and also the vocals use quite some good variation so it avoids sounding one-dimensional. The Pagan sound here is reduced to some passages sung with a clear voice and some melodic / acoustic interludes, but used in a prudent way to add more to the music. Some killer riffs like the main one found in the song ‘Divize Duchu’. In their basic core, VENOM, BATHORY and MOTÖRHEAD can be found, but also references to early incarnations of METALLICA, VOIVOD and DARK TRANQUILLITY. Great Metal has always been about a riff that hooks you. Well, there are A LOT here, and with the added bonus of a great production and a killer performance, this is surely a release to keep an eye on. This is one of those releases that with every spin something new comes out. The album closing song ‘Ztraceni V Sobe’ ends this one in an epic and furious yet touching way, again with many killer riffs. A great album and surely greater things will come in the future. www.torc.cz, www.murderous-prod.com