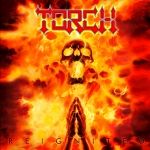 Well, I must say that after the slight trauma I suffered in not having at all enjoyed the new album by ARMORED SAINT and feeling really lonely with that opinion, it is a double pleasure to listen to something like this. In this album, the first one after 1984’s “Electrikiss” (2009’s “Dark Sinner” being mostly re-recorded stuff and only two new songs), TORCH definitely show that you can age with metallic grace. Being a mostly mid-tempo album, there are many moments of relative calm and melody, but the heaviness of the sound is never, ever, compromised. “Reignited” is truly what the title and the cover artwork show, a return of the TORCH after these long decades. And it burns with a very strong flame. The production is brilliant and heavy, and the power of the songs shines; every instrument pounds away inside your skull. And indeed, I grin when I hear a great solid anthem like ‘All Metal, No Rust’, and read lines like “We sold our souls to Metal” and they sound totally legitimate. Dan Dark is still sounding as good as he ever did, with his talent to sing both gritty and clean vocals and, surprisingly, only one guitarist in this line-up is a “new guy”, as all the rest of the members were a part of TORCH between 1981 and 1986. And they can really play! So if you are into bands like SAXON and ACCEPT (the two names that most readily sprang to my mind while listening to this), this return is more than heavily recommended. An excellent album you should go and find at www.facebook.com/torchrocknroll, www.facebook.com/metalville