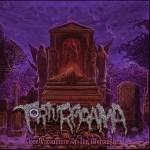 With “Close Encounters Of The Morbid Kind”, Belgiums own TORTURERAMA present us their first full length after two EPs, last year’s “It Begins At Birth” initially released as a tape. Packaged in a tasty artwork by Juanjo Castellano, “Close Encounters Of The Morbid Kind” takes no prisoners from the first guitar riffs of the opener ‘Bonesawer’. Yes, this is fuckin’ Death Metal! It is nothing else – no mosh, no core! It is merely influenced by the old school of Swedish Death. It is neither innovative nor groundbreaking. It is just a fuckin’ good Death Metal album! I racked my brains quite a few days what else I might say about “Close Encounters Of The Morbid Kind”… A song title like ‘Down With The Crowbar’ nearly says anything you need to know. These are ‘Flesh Ripping Sounds’ that are responsible for the ‘Smiles Of The Undead’. It is by far not a ‘Total Dragdown’, but an album that completely hits the nerve of anybody into old fashioned Death Metal. Like me… ‘Nuff said! Those who feel addressed should find TORTURERAMA at www.facebook.com/torturerama. You’ll find the label at www.facebook.com/godeaterrec