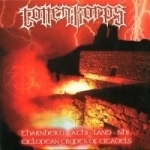 I read about this four piece from Chile quite a few times already, always wondered about their strange sounding name, but never got to hear their previously released stuff. In detail that is two demos ("The King Of Hell Reclaims His Throne" from 1990 and "Our Almighty Lords" from 1993), of which the latter one even got re-released on mini CD via Brazil’s Hellion Records in 1994. Unfortunately after that they seemed to run into various problems, from line-up changes up to an album recording, which suffered from such a poor sound / production that it remained unreleased. But Spain’s Repulse Records obviously really believed in the band so that TOTTEN KORPS got the opportunity to record another album in early 2000, which finally got released now. Musically "Tharnheim: Athi-Land-Nhi, Ciclopean Crypts Of Citadels" consists of Death Metal the brutal way, with shredding guitars, devastating rhythms and an incredibly deep growling vocalist. But this guy, Christian Ortiz, is actually the main reason why I’m not too fond about the album. Not only does his voice lack in real brutality (it’s just this typical guttural dog barking type vocals), he also pretty heavily suffers from lack of variety in his "singing". The vocals tend to sound too monotonous pretty quick, and that doesn’t really do justice to the overall pretty good material. So, if the band should ever manage to improve in that direction, TOTTEN KORPS could certainly be a band to watch out for as there’s enough potential available already to satisfy the needs of the Death Metal loving hordes around the globe.