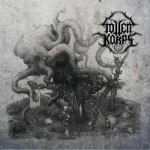 Apocalyptic Productions has been releasing some amazing music from a bunch of new Chilean bands. And now it has graced us with one of the best Death Metal albums I’ve heard in my life. It was released late in 2015 and barely made it to my top 10 list for that year. In my humble opinion and in terms of underground career, TOTTEN KORPS is to Santiago (Chile) what SADISTIC INTENT is to California (USA). These veterans started back in 1989 releasing 3 demo tapes before their legendary "Our Almighty Lords" EP in 1992 before the band went into hiatus. Fast forward 9 years; a renewed line-up gave us the revered "Tharnheim: Athi-Land-Nhi, Ciclopean Crypts Of Citadels" album in 2001. The band came back to life in 2011, including two of the earliest members (Torres and Soto). They took 4 years to put out "Supreme Commanders Of Darkness" and the wait was more than worth it. It surprised me that TOTTEN KORPS hasn’t changed at all. It still stands for evil, darkness and horror infused with some Lovecraftian influence. Their lyrics evoke timeless aeons filled with shapeless forms that haunt this plane of existence we inhabit. Music wise, the album features a stellar production, drenched in blood and filled with the reeking stench of death. The guitar tone is heavy as hell, aided by a thick bass sound that supports the pounding drum work and the inhuman growls and shrieks. The raw mix lets every instrument come through clearly. The album has everything including maniacal parts, slow doomy passages and everything in between. And all those dynamics are easily identifiable as the album develops and malevolence takes over your soul like a bindweed. All the songs have their own identity and they work together perfectly, making this a great and oppressive listening experience. I do think this is one of those landmark releases that defines a certain space and time. Evil and obscure atmospheres, violent outbursts of sheer brutality and dense Death Metal is what this amazing band is about. So, basically, "Supreme Commanders Of Darkness" is a must have for any respected Death Metal fan out there. Words cannot describe how good this album is. I’ll say it one more time: get or die! Contact the band here and support them in any possible way, they deserve it: www.facebook.com/pages/totten-korps/115125388499172. And you can contact their label directly to get the album here: www.facebook.com/apocalyptic.zineprods