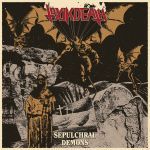 When you hear about Norway and Metal, first thoughts of course bring associations with the golden 90s Black Metal era that everyone knows about, because the paraphernalia that surrounds this topic. But for the ones who have been aware of what’s going on after that, you’ll encounter the 00s stream of Black / Thrash Metal that had spawn by the hand of bands as CONDOR, NEKROMANTHEON, DEATHHAMMER, BLACK MAGIC and some other ones. This Norwegian litter of hellhounds caught the torch of traditional acts as SLAYER (old), DESTRUCTION, KREATOR, RAZOR and even their compatriots of AURA NOIR, bringing a tangent of Thrash Metal that detaches from the silly and joke generic bands in terms of attitude mainly, and secondarily on the originality within the context of traditional Metal. Said that, from the clean and safe streets of Norway, TÖXIK DEATH comes with their 7-track second album, recorded and mixed at Elektrosjokk Studios and mastered at Temple Of Disharmony, resulting in maximum definition without losing intensity, even though the guitars seemed to be darkened with less gain than usual, awesome sound work. Seventeen years on the track seems to be a lot of time, and that experience finally is able to be seen on this release, because everything seems closer to the menacing and dangerous side of Metal rather than the generic and naïve feeling that the previous album had. Despite the simple arrangements and known patterns à la SLAYER or VENOM, you can sense that the wheel keeps on turning with raging passion, especially on the hard snare stabbing. Another interesting aspect is the new vocalist, who has a particular vomiting style that seems to be enrooted on a Hardcore background, but that also walks over the trail of the aforementioned Norwegian Thrash bands through the record. Delving deeper into the release itself, “Sepulchral Demons” demonstrates best their devotion to the speed thrashing sound developed on their years, with absorbing tempo beats and intense picking sharpness. The slightly different but well composed and interesting song on this album is ‘Morbid Divination’ which stands out above the rest on its 7 minutes length with memorable riffing and structure, would be better to watch that on stage of course. Bottoming out, “Sepulchral Demons” even though roams on known paths, the ability to grab attention throughout the entire album is there and somehow it is refreshing on their own terms over the huge amount of Thrash Metal spawns. www.facebook.com/toxikdeath, www.hrrecords.de