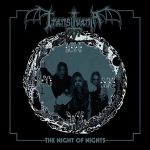 TRANSILVANIA
The Night Of Nights
(Into Dungeons)
48:23min

With a bandname like this, it really isn’t too hard to tell how this is going to sound like… and damn right, after a spooky intro it goes full blast into an anachronistic mix of Thrash and Black Metal – and I mean anachronistic in the best sense. Bullet belts, spikes, corpse paint, it’s all there, like straight out of an early 90s promo photo and the music doesn’t leave much to be desired either. It’s sloppy in the right places, the production is just gritty enough and even though some riffs are melodic and catchy as fuck, it doesn’t come across as unauthentic. I can sense a bit of TORMENTOR in the foul air between the graves these gentlemen sing about, DESASTER and NIFELHEIM are lurking in the shadows and the spectre of Quorthon watches over the whole spectacle, as he will do for all eternity. My only qualm with this album is that it does indeed sound a bit too upbeat, and… well, it’s too much fun. It seems that TRANSILVANIA perfectly know how to Metal, but not how to Devil… if you know what I mean. But at the end of the night, errrm, day I mean, this is a well crafted album, a perfect companion for drinking beer in nothing but your underwear and a spiked gauntlet. Just make sure to blast it fucking loud! The band’s dungeon is at www.facebook.com/transilvaniaaustria, the record label is www.into-dungeons.de.