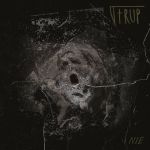 Even after all these years, I still do not know what to think when bands give their songs only numbers instead of real titles. On the one hand no distraction but focus on the essential, on the other hand, for me, titles are part of the total work of art. In the end everyone has to decide for themselves whether they like song titles like ’29’ to ’33’, only interrupted by the title song. TRUP from Poland are no newcomers, they are active since 2017 and “Nie” is their second full-length, accordingly the trio released three EPs. A bit of confusion is caused by the fact that there are two bands from Poland with the name TRUP, which translates to corpse. This TRUP is playing a mixture of Black Metal and Sludge Metal. Both styles are strictly separated. When it comes to the two Black Metal songs we have a generic early / mid-nineties style of Black Metal in the vein of DARKTHRONE (during their Black Metal heydays) and GORGOROTH. Rude, aggressive and fast played. The three Sludge Metal songs have a heavy tend towards Noise Metal, which means the listener is confronted with a meandering wall of sound. I guess this style is not for everyone, but I like it. Because, although classic song-structures are missing, it sounds fascinating, varied and thrilling. The last song ’33’ with its twelve minutes playing time is bit too long for my taste, but that is the only weak point of “Nie”. The band labels their style as Black Death Noise and everyone who finds himself here should definitely give it a listen. More about the band and label can be found at www.facebook.com/trupzespol and www.facebook.com/godzovwar