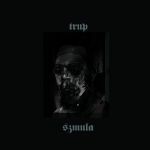 TRUP means corpse in Polish, as far as I understand, and this Polish trio does reek of death, decay and destruction. The ensemble is presenting us a noisy raw punkish Black Metal attack full of hatred and disgust. The atmosphere is dark and grimy and quite brutal and in our face. The album is about chaos, confusing and noise, there aren’t many organic waves of consistancy and hooking moments throughout the 26 minutes and 37 seconds. Evershifting rhythm patterns, broken riffs and spiteful and angry vocals. There is a deep rumbling bass or really downtuned guitar droning in the background and some synth effects, just as far back, which actually works quite well, and adds some dimension and depth to the output. I’ve had a hard time to get into this album, though countless listens open up for the depth the album has. A depth that doesn’t appear during the first listens. It quickly all succumbs into a noisy raw mass, though the music has some brutal and dark charm, when listened to careful, and not just noise and coincidence. Just take the 8 minutes track ’13’. There is / was a quite good Norwegian thrashing Metal band by the name of AUDIOPAIN, and what TRUP is delivering, when looking it up in the dictionary, is audio pain! Enter the deathlike silence: www.facebook.com/trupzespol, www.godzovwar.com