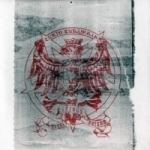 TT = TÚRIN TURAMBAR. First off, as some sort of a little package of background information for starters, in the writings of J.R.R. Tolkien, Túrin Turambar was a Man of Middle-earth, who became a tragic hero (or Anti-hero) of the First Age in the tale called Narn i Chîn Húrin ("The Tale of the Children of Húrin"). This is where this 2-men Polish experimental Black Metal project act TT, known by these two letters mostly I guess, sucks its main inspiration from – and creates a very disturbed and twisted sounding wholeness that for my cultivated ears at least, perhaps turns out be a too hard nut to break. As for some details of this recording, all the material for "Corona Regni Satanae", has been composed and arranged by Ataman Tolovy (also in STILLBORN and GENIUS ULTOR) in 2007 already, but the album was not mixed any earlier but between April and July 2010. With the help of Przerost Mrom on guitar and additional vocals and screams – and a couple of additional guests doing some background screams on this release, "Corona Regni Satanae" guides – at least metaphorically speaking, its listeners straight into some colossal madhouse, which is full of strange and creeping noises; in which also people get attacked by TT’s Polish-sung, raw-edged, doom-ish, brutal and weird sound complexities that certainly aren’t meant for everyone’s pain and pleasure therapy. I myself, am still struggling with my thoughts here whether TT’s disc causes me more headache than ear orgasms because this shit is truly darn disturbing most of its time. Just think of T. Warrior’s HELLHAMMER, pump it up with a strong stream of fellation for avant-gardism – and you have CELTIC FROST in your hands. Ha-ha, oh well, that may be true too, but there are a few moments here and there on "Corona Regni Satanae" that in fact, point out to HELLHAMMER’s direction more than just once. This happens every time when TT slows down, and takes a few zombie walks back and forth, sort of breathing the same cold air that Mr. Warrior did with his days with HELLHAMMER. If TT stripped all this experimental and avant-garde mishmash off around their songs, the songs would be more listenable and more easily digested, I know for me at least. Having said that, sometimes weird is good – and sometimes it’s not. Eh, got it? www.myspace.com/1992tt