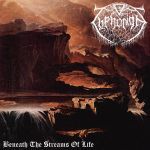 TYPHONIAN
Beneath The Streams Of Life
(Iron, Blood And Death Corporation)
50:17min

There’s never a shortage of extreme Metal from Germany. Ever. Any sub-genre you like, there’s a plethora of bands waiting for you. TYPHONIAN add to that with debut album “Beneath The Streams Of Life”. M.W. Styrum (vocals), Typhon (guitars and programming) and Prometheus (guitars, bass and programming) present a solid, consistent album throughout. There’s nothing really new to the mix of Death Metal within, but there’s absolutely nothing wrong with that. ‘Reduced To Oblivion’ opens the album with a brief ambient intro that sets the stage for ‘Walking On Skulls’, a mid-tempo wave of dizzy guitars and meandering drumming. The vocals are a throaty, warbling delivery. The third track ‘Tomb Of Mortality’ fires on all cylinders in a swarm of rapidity. The vocals are a little straining, but don’t affect the outcome all that much. ‘Where Light Has Never Been Before’ throws out some NILE influenced riffs, which you can’t really go wrong with. ‘Beyond Time’ and ‘Mists Of Sorrow both excrete some vile guitarmanship with a rigid edge. The drums add a nice touch in their ability to bring out the energy of each track. ‘Rigor Mortis’ continues the buzzing guitars as ‘Death Squad’ slows it way down in a doomy atmosphere that’s just as heavy and putrid as any other on the album. The ninth track ‘Through The Flesh’ brings back the aggressiveness full force. ‘Temple Of Impurity’ continues the madness as ‘Beneath The Streams Of Life’ wraps it up with a punkish, Hardcore influence that ends on a high note. TYPHONIAN isn’t pushing the envelope too much, but maintains an overall consistency of sonic satisfaction to make us look forward to what’s next to come. For more info, check out www.facebook.com/profile.php?id=100049048401534, www.facebook.com/ibdc666