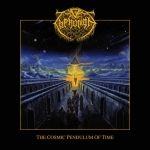 TYPHONIAN is a German Death Metal band that, having released their debut album “Beneath The Streams Of Life” in 2018, now brings us this rather lengthy EP, just short of a half hour of music. A suitably eerie intro invokes cosmic terrors from unfathomable depths while you look at the excellent album cover depicting some nameless clergy facing the cosmic pendulum of time in an untold planet. With this ambiance settled, we proceed to a somewhat unexpected musical journey. It is most definitely a Death Metal release, but with a lot of variation. The aptest way to describe this might be a usually mid-tempo Death Metal even descending into the doomy at times. However, they clearly took their time and work into creating these compositions. I found myself really taken in by their accomplished guitar work together with the very aggressive vocals. The guitars are a highlight for me; not that they are extremely technical, but the lead and solo work is often enthralling. This is quickly apparent and it shows throughout, perhaps especially in the fantastic ‘Throne Of Deceit’. TYPHONIAN’s Death Metal is, indeed, more intricate than technical, and is not limited to the cliché one has grown used to. Still, every member is obviously proficient and talented, from the drummer to the vocalist. They sometimes like to experiment with different string instruments, mainly in the atmospheric instrumental ‘On Primordial Pathways’, which paves the way to the title track and final song, surely the most experimental, with a patchwork of speeds that might sound disjointed but nevertheless flows well. There seems to be a kind of depressive, existential dread taken from some Black Metal sources here and there, and I guess it fits the cosmic theme. While listening to this I was sometimes reminded of bands like early MORGOTH, early CEMETARY and the likes… There is a lot of music to discover in this EP as repeated listening makes plain. Definitely recommended. Get this from www.facebook.com/typhonian-1627736060631510, www.facebook.com/ibdc666