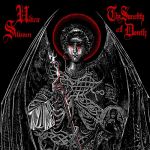 Already the debut “The Spearwound Salvation” was on heavy rotation for me during the year 2019 and only the quality of other bands prevented the album from ending up in my personal top ten. So I was all the more curious about the successor and about the path the band will take. And, so much can be revealed, the trio from Sweden never disappoints during the seven songs (the track ‘Tintinnabuli Diaboli’ is more some kind of interlude). ULTRA SILVAM are playing melodic Black Metal with a fierce and savage attitude. As if that was not already enough of a challenge some elements of the guitar work have their origin in Death and even traditional Heavy Metal. Sounds like a pretty weird mixture, but it really works. Just imagine a blend of BLASPHEMY, MIDNIGHT, the later DARKTHRONE and TEITANBLOOD. Compared to the debut some details have changed, but all for the better. The guitar sounds more organic, the overall production (done by Devo Andersson) is more punchy and the vocals are a bit more diversified. During the opener ‘Dies Irae’ the listener is even surprised by clean vocals, adding a decent epic touch. But like everything the band intends to do, it fits seamlessly into the overall concept. Accordingly some bumps regarding the song-writing were smoothed. What has not changed, however, is the passion and dedication with which ULTRA SILVAM celebrate their very special style of Black Metal. Even if I am leaning far out of the window now, but this is the album that WATAIN have never managed to record until now. And even though the year has only just begun I am pretty sure that this time ULTRA SILVAM will make it into my top ten list of 2022! Definitive listening recommendation, more information at www.facebook.com/ultra-silvam-1921107041438275 and here www.facebook.com/shadowrecords.se