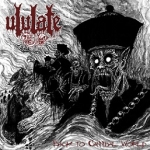 Humm a Black Metal band that turns completely into a morbid Death Metal band. Interesting. And then, the band comes from China. More interesting. And it is a one man band. Well, styles aside, this sounds a lot like the more brutal sounds of the Swedish Death Metal scene form the early 90s, in the CREMATORY, UNLEASHED, GRAVE vein with some slight touches of the US style in the IMMOLATION, SUFFOCATION and MORBID ANGEL vein. The recording is heavy enough with a deep and powerful guitar sound, and the very low guttural Death Metal vocals which by once are quite good and not that generic. It does remind me a lot of an era where recordings were demos, but with a better production. The bits of the sound that recalls the sound of early IMMOLATION are what make me listen more closely to the band. At the same time I wanted to know more about this band as what type of Black Metal they were doing before this total conversion. Well, they were more atmospheric kind of Black Metal, pretty much inspired by BURZUM with some depressive Black Metal touches, and with vocals done according to their then Metal style. In fact all their 4 previous works to this album (including a first full length) were in this style of raw atmospheric Black Metal. The transformation is a bit drastic, as just one year before releasing this new album they were still doing Black Metal. And to be really honest, they are quite a better Death Metal band than a Black Metal band, so the style fits them better. And no, there is not a slight trace of their Black Metal origins left. Which, believe me, was the best thing. As it is a quite entertaining Death Metal band, that has that essence of the old demo days wandering. I can foresee deadlier things to come. http://site.douban.com/ululate, www.xtreemmusic.com