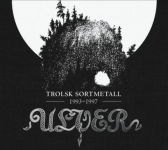 We are getting used to the fact that Century Media Records are doing these huge boxes and discographies. At times, this is a good way to get ahold of full catalogues for a good price. But then again, we get a couple of good songs and pure garbage on crap rehearsal- or bad live-recordings of the same songs over and over (ahem TREBLINKA, ahem). In this case it is time for ULVER to grace the compilation mania. This boxset, presented in a very luxurious way, both the CD and vinyl versions with huge booklets, info, song titles in English, we have the first 5 recordings of the band in one box. One could say it is their Metal years, but let me tell you that included here is also a full acoustic album “Kveldssanger” and it has nothing of Metal there. Still, their demos and “Bergttat” and “Nattens Madrigal” are included here. If you have not followed the band, which nowadays are more of a hipster acoustic / movie music thing, let me tell you that there are some enjoyable moments. I have always felt their demos and first album were more Folk than Black Metal, with at times some really awful clean vocals, and skipping the acoustic only album, the wolf tale in their third full length (and last Metal album) is my favorite. It has a very edgy guitar sound I must warn you in my ears this version of the box has been slightly remastered to sound less irritating, and it is by far the best thing the band did. Quasi-melodic very fast tremolo picking Black Metal, with drums recorded in like a distant forest and with no audible bass. Still, in this chaotic noise, there are some memorable moments. But, even back in the day, I always thought there were better bands around. I suppose early ARCTURUS took some elements of their grimness and did it with more musical finesse. If the gimmick of being a very mutant band through the years attracts you, get this one. If you are missing just the “Nattens…” album, then get it on its own. The gimmick that they melted the original demo recordings and did a few limited poster or post cards or whatever sounds really like a dumb marketing ploy. As it is, a nice historical product, yet again, if you are really selective on what early Black Metal is, I suppose you already possess the right album, so this is more an Ebay thing than really an evil Black Metal item. www.facebook.com/pages/ulver/31166220421, www.centurymedia.com