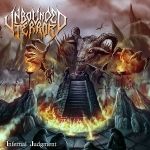 They were formed back in 1991 on a small island in Spain. I have their demo from back in the day, and their debut CD somewhere around (which by the way now can cost you a small fortune). And to be honest, back then, they were just another Death Metal band, with lots of enthusiasm, yes, but that was about it. One cannot forget about the awful demo cover and bad sound! They soon recorded their debut album, and it suffered from poor production, thin guitar sound and an honest approach at trying to emulate their idols. And that was the way things were back in the day, and damn I miss that spirit no matter all the flaws. I think they recorded a few more things after that album in 1993 and that was it. Silence. Until now, almost 30 years later they return. Well it is just actually the founder of the band with some newer musicians, but sometimes that is more than enough. They recorded their second album in 2020, and for once all things that were missing on the debut were corrected, and I must say improved. But the style remained the same, a primitive approach at Death Metal with many Doom Metal parts and the word “cavernous” all over. AUTOPSY, old THERION and BENEDICTION were the bands I used to compare them to back in the demo days, and that stays the same now. But add to that the experience that the band leader has (he has never stopped playing in other bands) and having a competent line-up and a very good recording and things are different. They had the essence but they just needed to fine-tune the sound. And now, we have something quite interesting in this compilation. One new song (which by the way sounds very good!), four re-recorded songs from their debut album, which really shine now, and although I do not fully remember the way the original sounds were, they have upgraded them and they sound a lot better. And to add, some live recordings of three songs form their last album in a great sound quality. As I mentioned before the style is there not to evolve but just to create and those who like their Metal of Death with an old school vibe, form an old school band, cannot go wrong. Yes, nothing original, nothing new, but with that passion that is being quite lost nowadays. www.facebook.com/unboundedterror, www.xtreemmusic.com