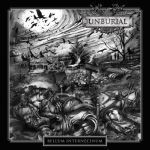 “Bellum Internecinum” is the first full length album released in 2010 by the Spanish band UNBURIAL. Eight tracks of epic and melodic Death Metal for almost 48 minutes of music, including a cover of the classic DISSECTION’s song ‘Where Dead Angels Lie’. This album was originally released by the German label Godeater Records as a limited digipak CD edition in 500 copies. In june 2021 “Bellum Internecinum” was re-released by another German label, Suffer Productions, as a limited 12″ vinyl edition in 333 copies and with a different front cover artwork. Here we have a pretty good album of melodic Death Metal with an ultra polished sound and triggered drums. There are some elements of melodic Death / Black Metal too, especially in the guitar riffs, whereas the vocals are very low guttural growlings. The production is clear and professional, so if you’re into raw and chaotic stuff, stay away from UNBURIAL. This is a band for fans of melody and atmosphere. The rhythm section is not at all fast or brutal, but it’s mainly focused on groovy and double bass tempos. An extra point goes to the whole album concept, because UNBURIAL is strongly inspired by ancient history, especially the Roman one. In conclusion this is a recommended addiction to your collection, if you’re into melodic Death Metal in the vein of DISSECTION, AMON AMARTH and early DESULTORY. More info you will find at: www.facebook.com/unburial, www.facebook.com/sufferproductions