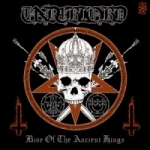 If you ever thought that there somehow was a release missing in the musical evolution from HELLHAMMER’s “Apocalyptic Raids” to CELTIC FROST’s “Morbid Tales”, this might be the record you were looking for. With “Rise Of The Ancient Kings” Canada’s UNDERLORD have delivered ten very cool compositions in the raw and simple sounding tradition of old HELLHAMMER (especially when it comes to the drums and the overall sound), combined with the typical riffing that made early CELTIC FROST sound so unique and heavy. Despite those wellknown elements UNDERLORD are far away from being another (tribute) band in the WARHAMMER vein. Their impressive vocal delivery comes across a lot more black sounding, luckily not of the usual shrieky type, but always rather old school and grim sounding. It happens pretty rarely these days that you’re about to find a vocalist of this dark emotional quality as most bands unfortunately seem to be more concerned in copying a style that has already been overused way too often. “UNDERLORD would especially like to thank VENOM, HELLHAMMER and WARFARE for lighting the path of darkness…” is written in the booklet – “Speed Metal” on the front. Quotes that sum it up very well. So, if you tend to miss the glorious times of old Black / Thrash Metal every once in a while, you should make sure to give this hellish three piece (courtesy of Hellfiend, Azag-Thoth and Lupus Void) your fullest attention. www.rageofachilles.com