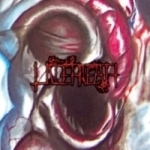 Without straying into incomprehensible sounding displays of technical wizardry, Portugal’s UNDERNEATH play in a style of Death Metal that requires proficiency and a talent for good songwriting. This album of theirs sounds like it belongs in the mid-90s, the style influenced by bands such as SUFFOCATION and CANNIBAL CORPSE, but with many evil sounding rhythms and progressions that remind me of DEEDS OF FLESH as well. Songs like ‘Finisher’s Thoughts’ contain such sinister sounding parts, and probably my favorite aspect of this album. This band can blast, but they also dare to play slow as on tracks like ‘Soulless And Lifeless Status.’ And every so often, as on ‘Nest Of Horror,’ they’ll throw in a great sounding solo; atmospheric and quite fitting to the music – another feature of the 90s style. However while this material is certainly enjoyable it wouldn’t be completely out of line for someone to pass it up in favor of something else. The album is good, but it isn’t so good you’d race home to hear it after work or school. And while cover art isn’t usually something I criticize, the artwork for this album is a lot like the music itself: interesting, worth looking at, but ultimately unremarkable, although the soft, pastel texture is old school looking. All in all this is a good album and worth a listen if you want to spare the time. www.underneathwebsite.no.sapo.pt, www.facebook.com/underneath.prt, http://metalhead.com.pt/en/dethstar/