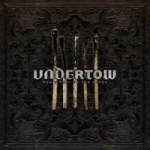 Records that hit the ground running like this one are always fun. Sounding a bit like EXODUS on “Force Of Habit”, and any one of a number of NWOBHM comeback albums, UNDERTOW is energetic, but their music is too late in coming; the Nu-Metal age is over and done with (thankfully). That is not to imply that UNDERTOW is a true Nu-Metal band, but they come close. One can hardly be blamed for making the association when the band in question makes liberal use of the base strings and breakdowns so characteristic of the once popular genre. No, the fact is that UNDERTOW are above that, but only just so. At times they bare their fangs and exhibit a Death Metal influence – but these occasional bright spots are tarnished with self-pitying choruses and rythyms that bring the Nu-Metal association back full circle. Perhaps a popular rock station in the Mid-West would be more this band’s speed. www.undertow.de, www.myspace.com/undertowofficial