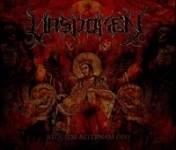 After a few church bells, a crying kid and a little bit of dark synth, we get a boring riff, just before we are being blown into a maniacal riff-inferno that could have been "Transilvanian Hunger" worthy, together with a grim and low rasp that follows the Black Metal oriented atmosphere really well, through out the track ‘Baptised At The Altar Of Rats’, a track that could have been written and performed during the mid-nineties. Before we enter the second track ‘Redemption Scars’ where we are getting thrown into a dark and pummeling Death Metal, with heavy and droning mid-tempo paces, a grim growl and nice breaks and leads. During the rest of the album the Norwegians differ between crushing old school Death Metal, grim and blazing Black Metal riffing and atmospheres and utter brutal chaos. An effective and catching blend for connoisseurs of smashing grimness and brutality, with a dark and cold atmosphere. All is tied nicely together with some good compositions and a clear red line that keeps the focus centered, even when most shifting and chaotic. This is my first encounter with the Norwegians, and if their earlier material is as hard hitting and lasting, as the nine tunes on "Requiem Aeternam Deo" I’ll have to check it all out, as this album has blown me away in a good and solid manner. Death and Black Metal has been re-written in quite some ways, and combined in many other, though seldom as effective and overall brutal as this. All further info at: www.facebook.com/unspokennorway, www.reverbnation.com/unspokennorway, www.deathrune-records.com, www.facebook.com/pages/deathrune-records/122588201158038,