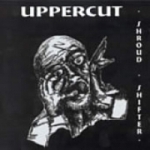 Putting out a release nowadays from a completely unknown band with a crappy packaging like this is either a rather stupid or a financial suicide decisicon (in this case probably both). No bandlogo, just ordinary computer fonts, very poor layout and a b/w drawing that other bands wouldn’t even dare to put on the sleeve of their demo cassette simply doesn’t do justice to the musical qualities delivered by this German four piece from the Wolfsburg / Braunschweig area. Too bad, really. UPPERCUT is a very energetic Thrash act with lots of Death Metal influences and a female vocalist, who comes across almost as brutal sounding as Rachel (SINISTER), Melanie (MEGACE) or Sabina (HOLY MOSES). In fact, I really like this eight track effort as the band not only sounds very fresh, they also managed to come up with a songwriting formular, that should easily make people move and headbang during their live shows because of the intensity and diversity of their straight to the point outbursts. Somehow it reminds me a bit on the stuff that COMECON came up with on their debut, with a couple of SLAYER elements incorporated and the raw and brutal vocals on top of it all. Very entertaining disc (not only for the cool Tom Hanks / “Money Pit” outro…), that definitely deserves to be checked out. I just hope the band will get the chance to re-issue this with a more appropriate visual side in the near future, otherwise the record might get lost very easily. You can order a copy of the disc for $10 (ppd.) from the label directly: G.U.C., P.O. Box 28 01 45, 01141 Dresden, Germany, E-Mail: G.U.C.@gmx.de, website: www.guc-area.de