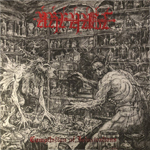 Let’s just get this out of the way. URFAUST are a weird fucking band. And not weird as in necessarily experimental. Just… weird in general. The music doesn’t follow the normal patterns of Black Metal. The vocals don’t follow any patterns at all. Sometimes it’s even a tough listen. And yet… they’re damn likeable in an indescribable way. I can’t really pinpoint it, but I want to keep listening. IX (guitars and vocals) and VRDRBR (drums) are a duo who don’t hesitate to bring the genre into new territories. And “Compilation Of Intoxications” is a good example. Consisting of tracks from various splits and an EP, the group of songs offer a wide range of what URFAUST are all about. The opening ‘Intro’ is beautiful in its own right before plunging headlong into ‘Die Erste Levitation’, a smoldering, lumbering beast with some shaky, screeching vocals and almost meditative chants frothing in and out. ‘Zelfkastijder’ opens with a blood-curdling scream dueling with monk-like vocals as the guitars are freeing in their simplicity and the drums plod and thunder. ‘Hypnotisch Bevel’ sounds like hundreds of swarming insects slowed down to a snail’s pace, but still intimidating in their own way. An almost Depressive Suicidal Black Metal vocal vibe cries out from the background. ‘Zelfbestraffingstendenz En Occulte Raadsels’ has an almost Rock like drumbeat with clean, yet distorted singing and murky guitars all melting into each other. ‘Vom Freien Tode’ has a more traditional Black Metal sound… well, sort of. Again, there’s nothing basic about this band. And lastly, there’s ‘Scrabreusheden Uit Het Tuchtarsenaal’, with tinkling bells, roaring guitars, and an overall atmosphere of lost hope… or something. The almost middle-eastern vocals add a certain unsettling touch to it all. This compilation, though not necessarily something a new listener may want to start with, is something that definitely shows off the band’s diversity in sound. URFAUST aren’t a band that will attract the casual Black Metal listener, but will definitely appeal to the more open-minded listener who expects a little more out of their music. For more info, check out www.facebook.com/urfaustofficial, www.van-records.com