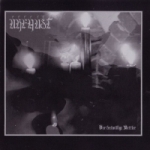 One reason for my activities for Voices From The Darkside is my personal interest and dedication to the acts which intentionally destroy all style limitations to reach a new musical level. For years the so called Black Metal cult is more a product which needs to follow certain rules (to become commercial successful) than a matter of convincing dedication – but luckily there are still bands like URFAUST. Their unique mixture, which is taking elements from several typical sub-genres, is nevertheless denying the listener the chance to pinpoint them to a certain direction or give me the chance to play the well known game of name dropping. The act from Belgium has been founded in 2003 as a pure ambient project before they started to extend their musical horizon. Eight years later the band is part of the honored Van Records family and their releases are available in several special editions – mainly dedicated to the old vinyl cult – and their name is connected to a unique understanding of ambient Black Metal. Honestly speaking is their third evocation – ignoring the separate tracks of “Der Freiwillige Bettler” in favor of an overall perspective on this record – far more like a dark ritual to our true master than just a simple record. URFAUST presents their ambient parts mainly separated from the pure Black Metal parts but they are nevertheless deeply connected in some way like a surrounding fog within their dark crypt. Especially these ambient parts slightly supported by soundtrack fragments – for example the title track is working with the motive from Bram Stocker’s Dracula – are so far away from the established silence vs. silence shit that it will send shivers down your spine. A fantastic release which will remain under my pillow for the next couple of weeks, so please check following links to get your copy of the limited version of this occult release: www.van-records.de, www.myspace.com/urfaustfans