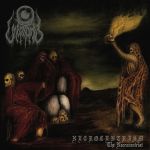 UTTERTOMB – what a beautiful name, not to mention the great cover! Immediately I fell in love with this band from Chile. Rotten, asphyxiating and stinky Death Metal I expected and that is exactly what the listener is getting served. Somewhere I read the words that in South America there are only good or very good Death Metal outfits. UTTERTOMB belong to the first category, this EP is not a high flyer, but easily overtaking the recent mediocre albums of IMMOLATION and OBITUARY. Five of the six songs have been released already in 2012 (“Necrocentism” EP), those got re-recorded and the four guys added the song ‘The Necrocentrist’ to, in their own words, to close the concept of the whole release. By the way, Necrological Death Metal, that’s how the band is labeling their style. For me it sounds like a very huge influence of AUTOPSY and, especially during the slower parts, ASPHYX. So if you want to fell like 1989-1992, then UTTERTOMB should be your first pick. For all further information check out www.facebook.com/uttertomb or www.pulverised.net