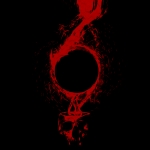 The dawn of the new wave of occult Death Metal is far from its end. While Canada, Germany, US, Australia and even Greece have the most iconic (current) wavers of this "dark" Death Metal influenced by early INCANTATION and IMMOLATION, the UK is probably the country that has the most twisted and obscure bands of the genre. It’s almost impossible not to mention GRAVE MIASMA, CRUCIAMENTUM and even BINAH when you are in the middle of a discussion about this punishing and oppressive way to execute the famous 90s New York Death Metal, it’s also true that we all can hear influences of even early Black Metal mixed in between and in some cases even some Doom passages, and the bands from England are the ones expanding the range of the genre even further. VACIVUS is a band hailing from the UK, and they also play Death Metal the old fashioned way but with a twist. What’s interesting about VACIVUS is the fact that this EP has more in common with NECROS CHRISTOS and DROWNED than their UK peers, making more use of the mid tremolo down tuned rhythmic guitar sections than the fast guitar drum pattern playing blasts all together at the same time, so to make it clear VACIVUS feels and sounds more loose and less tight than their fellow UK partners. The vocals have the same resonance and presence of NECROS CHRISTOS, an almost middle east, raspy and hypnotic growl. I think so far you know what’s happening inside this record and what it’s trying to accomplish. Even you always searching and hunting down bands / records that go hand in hand with your DEAD CONGREGATION, GRAVE MIASMA and DROWNED albums, look no further, this EP is right down your alley. Go pay a visit to www.facebook.com/vacivus and www.hellthrasher.com